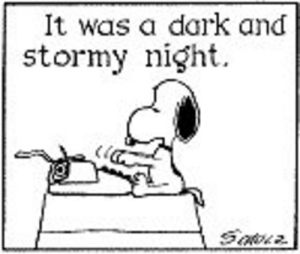 It was a dark and stormy night and Miss Fredickson stared outside her beach-house window wishing to be on the other side of the Earth. More precisely, she wished to be on another planet. She was wrapped up in a warm, soft duvet and sipped her tea so calmly it wasn’t so hot anymore. Good, she never enjoyed hot drinks, anyway.

Loneliness had been her companion for quite a while now. It had already been too much, too hard, too long. She was in that place and time where she felt the weight of the years being piled up high behind her. It was time to crash, burn or fly. What?! Such a non-sense sensation, for crying out loud!! “Crash, burn or fly, my ass!!”, she told herself in a firm voice.

She knew, deep down, that her life had been well taken care of. It was ready to be lived to its fullest! She could not complain. She was happy! Sure… she was happy!! She had it all of the best quality possible, but still she would choose to sleep on the floor from time to time because her bed was too soft… Nothing wrong with that, she would convince herself, it is good to have choices.

She then tricked herself into believing that time was all she needed to come to her senses, to find her way. Time! What a funny little thing: it either went by too fast or dragged on her too slow. Even more strange was the fact both things happened to her simultaneously! How could it be, she wondered. No replies… The questions would just fly around inside her hard skull. Questions were like plague: one would pop up and pull others by the hand in such a fast pace! Hand in hand they would dance in circles, turn into spirals and make her dizzy.

The hidden corners of her mind would spend hours or days sending useless prayers to all existing Gods to have  an UFO come pick her up and make her fly around the stars. Fly as fast as the twirling dance of the questions inside her head. Fly away above the sea. She loved the sea. Fishes seemed to be worries-free animals. The quietness of the underworld was something that had always attracted her. She wanted to be like the fishes… swim freely in full harmony to the dance of all others. She smiled to this thought and felt peaceful, wholesome again. When one fish would change the direction, the others would easily follow because they understood each other, unlike those so called friends she had that pretended to understand or even care for her. The peaceful sensation was quickly washed away and her face expressed a cold stone look.

She hoped, dreamt and prayed that sometime she would find her way. She recognised she needed to be the friend she longed for , but… How could she if her heart would stubbornly not find a way to start all over again?

“I’ll just step aside and let my other self have her own secret fight. Not even I want to argue anymore.”

After crying until she was dry, she felt thirsty. She needed water. Water. Sea. Fishes. The fishes!! Gladly thinking about them, she jumped on her feet, got a few things she considered important and opened her door that led straight to the deck that led straight to the great ocean. A dark and stormy ocean, just like the night. In fact, she could not tell them apart: where did one begin and the other end? Were those white dots the stars or reflections of light on the sea?

Her brain grabbed this question and would not let go of it. The question had ceased the voices and quarrels inside her. She then just kept repeating “which is a star, which is reflection?” while walking forward and stumbling a bit. “Star or reflection?”… The wooden deck squeaked and complained of the heavy weight of the stones strapped around her and in her pockets. “I wonder… is it really a star?” She took a few more steps towards the darkness, trying to solve the sight puzzle. “Star… or reflec…?” – her words were cut by the water that filled her lungs. She saw the fishes around her and felt finally happy because all voices and questions were definetely gone.

She knew fishes were wise, but now she had realised it was because they were deaf. A little too late she understood that happiness is linked to not listening to crap. All she had to do was shut up the voices inside her and shut down her own amplifier. She smiled upon finally coming to a conclusion when saw a very bright light shine in front of her eyes.  Now she was certain it could not be stars nor reflections of light… It was too bright. As bright as the peaceful sensation she was enjoying.