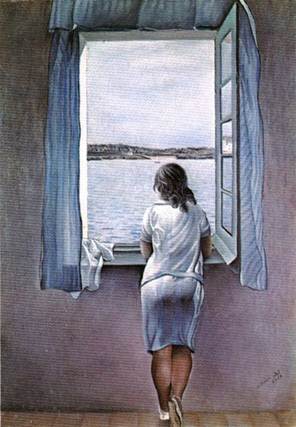 There was nothing behind me. No furniture, no clothes, no dishes, not even a cushion to seat on. Literally nothing. I left everything I believed I had behind and made sure no bread crumb fell on the way: I did not want to and would not be found. Upon opening my new one-chamber home, I took exact six slow steps and leaned slightly on the window, resting my right leg on the left as this was always the one to burn more upon my long strides. The curtains, the only thing left in the house that moved, softly accepted the wind’s invitation for a private dance which was later one turned into a quartet as my hair and skirt joined them. My nose was itchy from the hair gently stroking it but I made no movement. I just stared at the great beautiful nature in front of me. I inhaled that salty, thick air. My lungs complained in the beginning to the new sensation but soon  came to terms with it. My tongue felt dry watching all that water and the throat went along. I swallowed not sure if by thirst or bewilderment. Blue and white: that was all my eyes were capturing and I froze that image for a second forever in my mind with a mental picture. Click. The horizon was showing me an ocean, a sea of endless possibilities and a sky in doubt whether to be clear or cloudy that could not mean anything else but a good omen. So there I was: facing my own private endless ocean inside my own private way-too-few-to-mention-square-feet. Could there be a larger physical contradiction such as this happening somewhere else in the world? It didn’t matter. I sensed the strong handful of nothingness behind me and, In spite of looking ahead, I wondered if anyone had ever considered how powerful nothing is? It didn’t matter. In front of me lay water: loads and loads of cold and tricky water. There was a resemblance between the water and me. It was only then that I discerned the agreement between it all: blue and white; sea and sky, shirt and skirt. I confirmed the scenario, I belonged. And my new home-sweet-home welcomed me with a chilled breeze.