(Disclaimer: before reading, open Starman in Spotify and follow along)

Didn’t know what time it was and te lights were low
I leaned back on my radio
Some cat was layin’ down some get it on rock ‘n’ roll, he said
Then the loud sound did seem to fade
Came back like a slow voice on a wave of phase haze
That weren’t no D.J. that was hazy cosmic jive…

I could hear Bowie singing from the top of his lungs, yet making no effort whatsoever as if singing, for him, was as easy as drinking water is for me. I then approached the kitchen where the music was coming from, and there she was. Washing the dishes, singing, and moving her body in total synch with Bowie. Her movements made it seem that the only, and best way to dance to Starman, was indeed whilst washing the dishes. Had it never occurred to anyone up to that moment? I particularly love when she closed her eyes, raising her chin as if towards the Starman when the chorus played…

I kept on watching how, at all times, even with her eyes closed, she kept on masterfully washing the dishes. She and Bowie were truly in synch – each with their abilities. And how present was she at that moment, totally absorbed by his voice, the water, almost as in a trance (but then again I hand that to Bowie… he does that to people). Observing her in her immersion in the full completeness of nothing much; yet everything, a trance within a trance. I was completely drawn into it, mesmerised and thought of nothing. I simply heard him through her lips. Bowie, the chameleon, was alive in my kitchen in a woman’s body. There might have been smiles on my face, and some tentatives of singing along with no sound so as not to disturb anyone.

Then the la, la, la, la-la, la, la, la part came along and I joined her as she was done with the washing. The la, la, la, la-la, la, la kept us singing aloud, and together; I might have thrown my arms up in the air while swirling around. I was no longer looking at her, but fully inside a mix of this is as free as I can be right now and trying to hold on tight to this feeling as if held by a very fine thread as it announced the end of the song. When the last la, la, la, la-la, la, la, la was sung, I opened my eyes, a little oblivious to what was around me and noticed her filming me with an old camera of hers that had no sound features any longer. Bowie and I were now timeless, bonded forever in this little time capsule in which, maybe, one day, the Starman and I would swirl together. 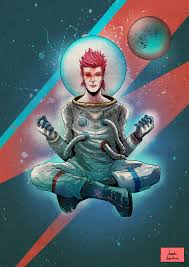